While $5.6 million seems like a lot of money for just a slot, think about how much advertisers are spending on the additional costs of producing these commercials, often known for having A-list talent, crazy special effects, or even award-winning directors.

The cost of Super Bowl advertising is so pricey that even many big brands who can afford it have chosen to spend their money elsewhere.

Take Skittles for example. In 2018, Skittles decided they didn't want to shell out millions of dollars on a Super Bowl ad. Instead, they used the money to create a full-length Broadway musical.

What could the Skittles musical possibly have been about? Well, it was described as a musical commercial that discussed the insincere and high-priced world of advertising.

The musical was never aired on TV or streaming services, but here's a look at the musical's main ballad, "Advertising Ruins Everything:"

While what Skittles did was both creative and clever, it was still pretty expensive. And, as a small business marketer, you likely can't afford a Super Bowl ad or a Broadway musical alternative just yet. But, having a small budget doesn't mean you can't create a high-quality campaign or advertisement like the pros.

Below, I'll list four common advertising strategies that brands use during the Super Bowl, or other major events, then walk you through how you can take advantage of each on a much smaller scale while still effectively gaining brand awareness.

As a small business marketer, you don't need to pay for a high-priced televised ad slot to get seen by the right audiences.

With the growth of online platforms and social media networks, like YouTube, Facebook, and Twitter, we've also seen the growth in opportunities for in-stream advertising. If you're less familiar with this form of advertising, it allows you to submit a video-based ad to a service like YouTube or Facebook. Then, the ad will usually be seen as pre-roll or mid-roll within longer videos.

Investing in online on in-stream video ads might also be a better bet than investing in traditional television commercials. Aside from the Super Bowl and other major televised events, people are tuning in less and less to live television. Meanwhile, consumers are streaming video, surfing the internet, and logging into social media channels more than ever before.

Additionally, while Super Bowl or TV ads usually have one up-front cost, online ad placements have more flexible costs that can be higher or lower depending on how long they are, how long you'd like to circulate the ads, and the size or scope of your target audience. To put it plainly, while brands pay millions for just 30-seconds during the Super Bowl, ad platforms like Facebook or YouTube allow you to spend less while targeting audiences that are most likely to engage with your content.

Another perk? While televised commercials require a consumer to remember and look up your brand later, online ads often allow audiences to click on them directly when they're interested in your product or offer. This automatically adds a greater chance of ROI and decreases friction between the brand and the customer.

If you decide to take advantage of online video ads, you'll want to drill down on your buyer persona before putting money behind an ad platform. Ask yourself questions like, "Which social media platforms do they use?", or "What's their gender and age range?" The answers to these questions will help you determine which social media platforms you should run ads on and which audience targets you should set for your ads.

On online platforms, you'll often be able to purchase an ad slot between six seconds to one minute long. However, because the internet is so fast-paced, your audience's attention span could be much less than your allotted time. For example, on average, Gen Z and millennials will only pay attention to online content for eight to 12 seconds.

If you purchase a more budget-friendly skippable ad placement, drawing attention will be an even more crucial strategy as uninterested viewers will press the "Skip Ad" button to watch the video they've searched as soon as they're able to.

Here's a great example of a pre-roll ad from the job search site Reed.co.uk. The ad immediately draws attention with a video of meowing kittens. Then it embraces its pre-roll placement by calling out YouTube viewers for watching videos because they're "distracted from their job." At the end, Reed, the site's founder, tells the viewer to click on the video, which will send them to the job site:

As you create an ad, take a note from Reed.co.uk by ensuring that it draws attention immediately.

Don't have a box of kittens like the ad above? Consider using other techniques to draw attention, such as presenting a relatable pain point, offering a value proposition, or placing viewers into an action-filled scene when the video starts playing.

2. Dive deeper into a narrative.

Aside from traditional commercials that establish a basic pain point and offer a simple product-based solution, Super Bowl ads are also known to have a unique storyline or feel like miniature movies.

Here's one historic Super Bowl example that sits in the Clio Hall of Fame. During its 1984 ad spot, Apple announced the Macintosh with a commercial themed around the George Orwell novel, "1984."

The novel, written in 1948, told the story of a dystopian society where all people followed one leader, dressed the same and conformed to the same ideologies.

The Apple commercial stays in line with the George Orwell classic as it begins with thousands of men walking in a lined formation as they enter an auditorium where an all-powerful leader preaches about their society on a giant screen. The ad's narrative gets interesting when a woman in colorful clothing suddenly runs into the room and hurls a hammer into the superior leader's screen, figuratively destroying the bland conformist society.

Why was the Apple ad so fascinating and iconic? At the time, Apple was considered a young disruptive underdog company while the PC world was monopolized by IBM -- a much more traditional big corporation. This commercial is a deep metaphor for how Apple's brand, innovative products, and mission would free computer users from the monopolies of past tech giants.

Yes, Apple did have more resources than the average startup when producing this ad. In fact, it was directed by Ridley Scott -- known for his work on award-winning films like Alien and The Martian.

But, on a smaller scale, all it takes to create an attention-grabbing narrative ad is one or two creative team members and affordable video equipment.

Additionally, commercials that tell a great story don't necessarily have to discuss a deep or intense topic, like Apple's. Alternatively, they can also be quick and funny anecdotes.

This smaller-scale example from Bernie & Phyl's Furniture simply tells the story of a bulldog getting behind at his office job. The storyline encourages people to spend more money on crucial things, like job candidates, while still saving money on furniture at the store chain:

Interested in crafting a compelling advertisement script? Check out this template. If you have a great idea but aren't sure where to start production-wise, read this step-by-step guide.

Whenever there's a major event, like the Super Bowl, big brands jump to create campaigns that leverage trends related to it. This is because people who are interested in the event might also enjoy the content or ads that discuss it.

Although big brands air commercials during major events, you can instead create campaigns that make pop culture or event references. These could include blog posts about how an event relates to your industry, a social media post that leverages topical hashtags, or a marketing video about how your customers might be celebrating an event.

Here's an example where the energy drink brand G-Fuel asks Twitter users to reply to their tweet with who they think will win the 2020 "#SuperBowl." In the tweet, they include an image of two G-Fuel drinks in front of a football field: 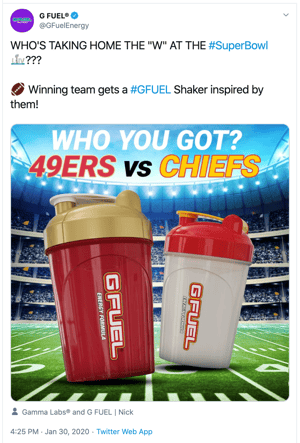 This is smart because those who are interested in the Super Bowl might click the #SuperBowl hashtag or search the topic and find this post. Although it doesn't directly advertise the drink and doesn't have an endorsement from the NFL, the post still leverages the trend and enables Super Bowl fans to learn more about the sporty energy drink.

However, while leveraging a holiday and social media trends might seem like low-hanging fruit, you should keep in mind that each event has certain legalities around it.

For example, the NFL has trademarked the term Super Bowl and does not allow brands to say the event name in content with commercial intent. So, if G-Fuel were to promote its drinks as "official Super Bowl beverages," it would infringe upon this trademark. However, by showing a picture of their product in front of a football field and simply asking fans about their thoughts on the actual game, they aren't saying that their product is in any way endorsed by the NFL.

To avoid any further blurred lines when referencing the Super Bowl in a paid ad or commercial, brands usually call it, "the big game" or "the football game," instead.

Sometimes, even for big brands, it's more budget-friendly and engaging to create a co-marketed Super Bowl ad. With this strategy, two or more brands put money, time, effort, or resources into creating a joint piece of content that cleverly highlights all brands involved.

Here's a great example of a 2015 ad where Newcastle pooled its money with 37 other brands to buy a Super Bowl ad slot that mentions all the companies at some point. The ad was appropriately titled, "Band of Brands:"

The example above is one of the most insane examples of co-marketing, but this is a strategy that is incredibly scaleable to small businesses and has been used as a tactic for ages.

Below is an example of how Louis Vuitton and BMW joined forces as luxury travel and transportation product providers by launching a series of ads that show their sleek, black products together. The campaign was titled, "The Art of Travel." 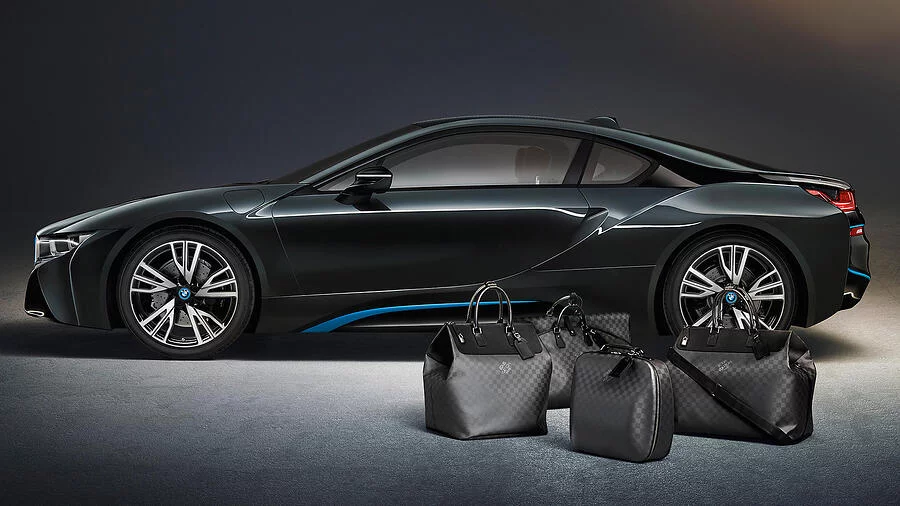 The co-branding example above is effective because it features two companies that complement each other rather than competing against each other. Their audiences, which are made up of upper-class professionals, also mesh well together and will engage similarly with this type of promotion.

Aside from high-budget productions and interesting storylines, Super Bowl commercials are also known for their star-studded casts. Remember this Amazon Echo commercial where Alexa is voiced by a handful of popular celebrities?

Although you probably can't hire stars like Cardi B, you might be able to budget content from a micro-influencer who's heavily followed or considered credible in your industry.

When you sponsor an influencer that really understands their audience and your industry, they'll create and publish content that intrigues their audience while also highlighting your product.

In this example, the smartphone game "Run Around" sponsored a TikTok user who's gained more than 15,000 followers simply by recording herself playing mobile games.

In the effective TikTok example above, the brand identified that gaming-oriented audiences were on TikTok and sponsored an influencer who's audience anticipates her mobile gaming reviews and demonstrations.

As you work towards creating a quality ad on a budget, keep these scaleable big brand tips in mind:

Want to see more effective big brand campaign strategies that you can learn from? Check out this post where we reveal our favorite campaigns of 2019.