According to a recent study from Statista, Facebook has an estimated 2.7 billion monthly active users worldwide, including roughly two-thirds of the US population. There's no social media platform more prominent or ubiquitous. No other online destination offers you more potential exposure to prospects.

A well-maintained Facebook presence is central to many — if not most — companies' social media strategies. It's a key factor in processes like conducting outreach, projecting legitimacy, generating interest, and driving traffic to other content and company resources.

One avenue businesses can leverage to make effective use of Facebook as a marketing tool is paid advertisements — a format that has moved through several iterations over the years.

Here, we'll get a timeline of some of the most important, interesting milestones in Facebook ads' evolution, a picture of what the future might hold for the medium, and what this all means for marketers.

Roughly two months after Mark Zuckerberg and Eduardo Saverin launched Facebook in February 2004, the two took some minor steps to monetize the platform — just enough for a small financial cushion to help while the company got off the ground.

As Zuckerberg said in an interview with the Harvard Crimson shortly after the platform went live, "It might be nice to get some ads going to offset the cost of the servers."

The ads themselves weren't particularly sophisticated, and the founders didn't have much of a firm grasp on digital advertising. Still, the project represented a milestone in the history of Facebook advertising.

It was the first time the platform tried to make money from the platform through ad sales. Unrefined and seemingly uncoordinated as it might have been, the Flyers project still helped keep the platform afloat during its early days and warrants a mention on this timeline.

As Zuckerberg put it, "The core of every user’s experience on Facebook is their page, and that’s where businesses are going to start as well...The first thing businesses can do is design a page to craft the exact experience they want people to see."

The new program also introduced "Social Ads" — ads that combined social actions from a user's friends, like a recent purchase or review of a business, with an advertiser’s message.

This allowed advertisers to deliver more specific, targeted ads to users that included information from their friends. These ads appeared either within a user's news feed or in the site's designated ad space.

At Facebook Ads' official launch — 2007's Facebook Social Advertising Event — Zuckerberg summed up his vision for the program, "Facebook Ads represent a completely new way of advertising online. For the last hundred years, media has been pushed out to people, but now marketers are going to be a part of the conversation."

In 2011, Facebook introduced its "Sponsored Stories" project — a program that placed paid advertisements directly on users' news feeds. Initially, the company pledged to only show users just one sponsored story on their news feeds per day. Those stories also stemmed solely from friends or pages users already liked. 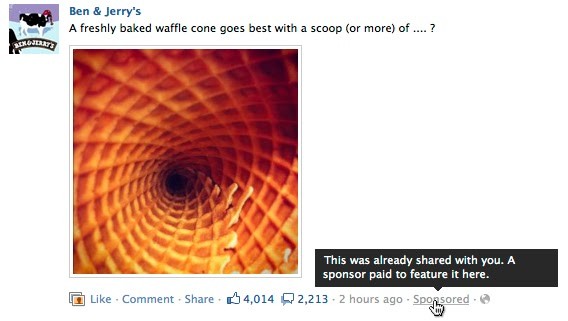 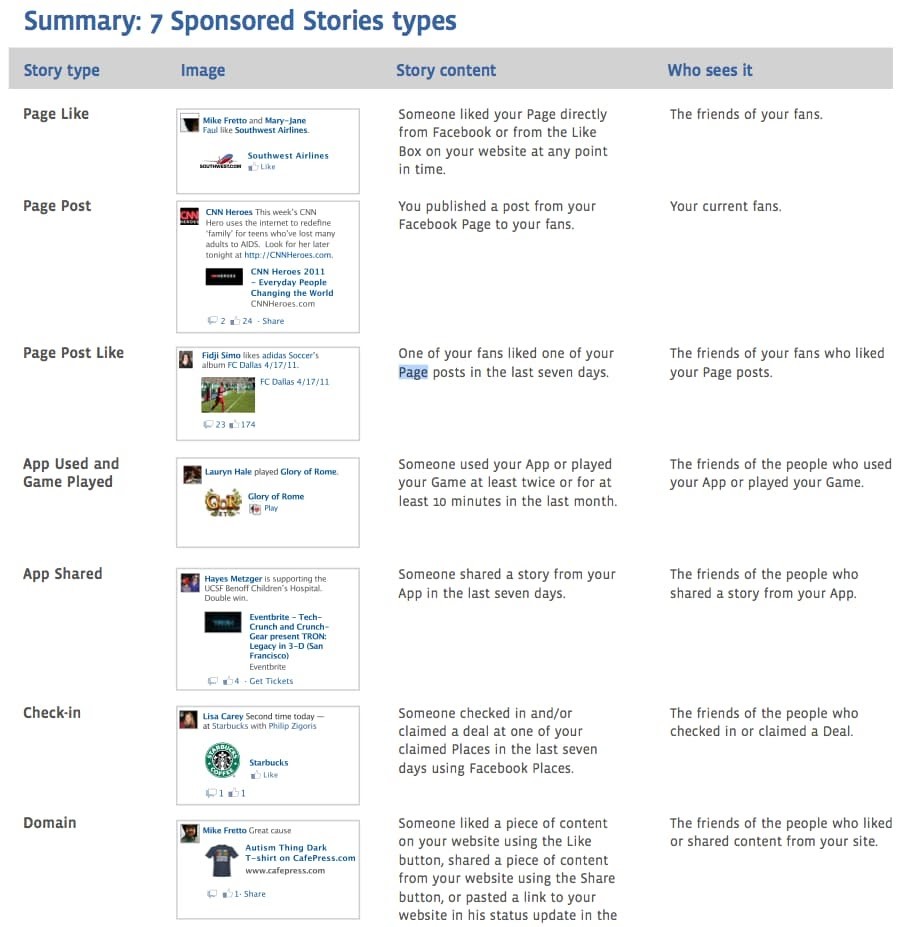 Though it was impossible for users to opt-out of the program entirely, they still had the option to close out individual ads. "Sponsored Stories" certainly rubbed some users the wrong way, but advertisers saw it as a big win. Finally, they had the space to display their ads directly in the mix of social content and consumers' news feeds — a wildly valuable stretch of virtual real estate.

Up until 2012, Facebook's mobile app didn't actually make money. It didn't feature ads, and the move to incorporate them was considered a risky play. Consumers weren't exactly thrilled with the idea of having ads take up space on their mobile feeds. 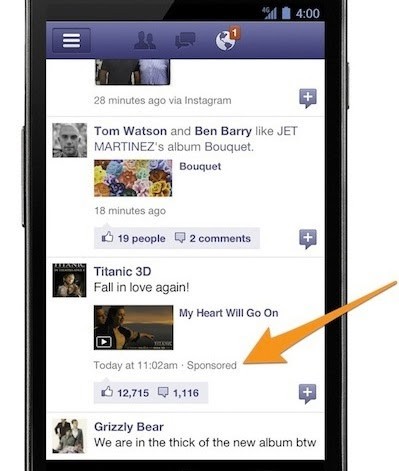 Facebook opted to subtly ease advertisements into users' feeds. Its mobile ads plan borrowed heavily from the desktop platform's "Sponsored Story" strategy — seamlessly blending in paid promotional content and having it look like standard statuses or other user-generated content.

In March 2014, Facebook introduced its new ad structure. Until that point, the platform's campaign structure consisted of two levels: campaigns and ads.

Campaigns — the overarching plans that correspond to specific advertising objectives — were designed to help users optimize, and measure results of individual ads. With this new development in Facebook advertising's evolution, a buffer was put between those two levels.

Ad sets — subsets of a campaign that could feature their own budgets and target separate audience segments — were introduced. Those sets gave advertisers a new level of structure for honing in on, best appealing to, and better understanding demographics of particular interest. 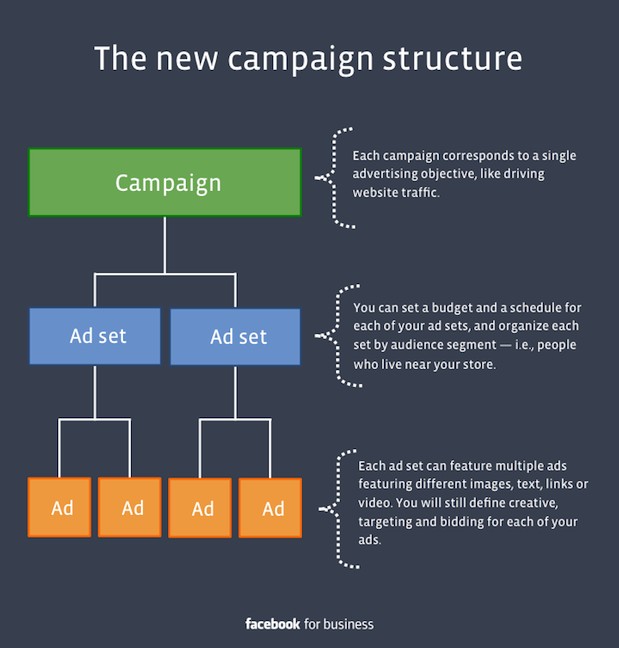 According to a Facebook press release, the program was designed to "make it easier for advertisers of every size to organize, optimize and measure their ads." It was a game-changing milestone for the platform — one that made its advertising infrastructure more thoughtfully regimented and easier to navigate.

In 2016, Facebook made a push to capitalize on the tremendous advertising potential of its siloed mobile messaging function. One of the ways the company looked to take advantage of the system was through the incorporation of chatbots. Facebook offered businesses two paths for bot incorporation — "Sponsored Messages" and "Click-to-Messenger" ads.

"Sponsored Messages" are ads that appear directly in a user's Messenger inbox — ones that allow users to automatically communicate with a chatbot by clicking them. 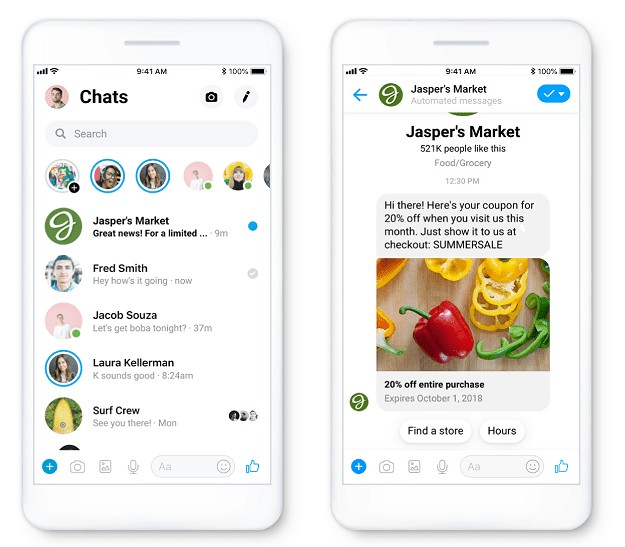 "Click-to-Messenger" ads leverage CTAs to place ads in users' Messenger inboxes. A business will draw users in with some sort of incentive — like a discount or piece of content — on the original Facebook platform and automatically send them a message via chatbot once they click on the offer.

Over its history, Facebook has consistently expanded its available advertising formats, aiming to effectively monetize the platform without compromising user experience. As of 2020, the company offers eight different advertising options:

As time goes on, you should expect to see this list expand and the nature of mediums it covers shift and progress. New technology and trends will bring new formats to explore and familiar processes to refine.

If there's anything to learn from Facebook advertising's evolution, it's that the processes and practices behind the concept will never remain stagnant. Mark Zuckerberg will never look at the platform's advertising infrastructure and say, "Yeah, I think we nailed it. We'll never need to change any of this ever again."

Advertising on Facebook will continue to evolve and adapt as new ad formats emerge, privacy and data regulations loosen or constrict, its user base changes, and social media trends come and go. There are too many factors at play to expect anything but constant, likely significant changes in the practice as time goes on.

So, what can marketers take away from this article? Is there any recurring theme underlying success across every phase of Facebook advertising's evolution?

As Facebook advertising has progressed, the companies that thrived in every stage were the ones that shared high-quality, engaging content that wasn't too abrasive.

Consumers aren't using the platform because they want to see ads. That's why the content you share on the platform has to come across as natural, interesting, and not too jarring.

If you prioritize producing and sharing valuable, interesting advertisements that won't overwhelm or frustrate your target audience, you'll put yourself in the best position possible to thrive as Facebook advertising continues to progress.