As we head toward the end of 2022, it’s time to look back at examples of brands that have successfully “newsjacked” a trend.

In this article, we’ll cover some of the top trending topics of the year and the brands that took them on.

In late September, artist Rihanna announced via Instagram that she would be performing at the Superbowl.

The image, which confirmed earlier speculations of the singer’s participation, quickly made its rounds.

Wasting no time, Popeyes then shared its own version of the popular image just one day later. 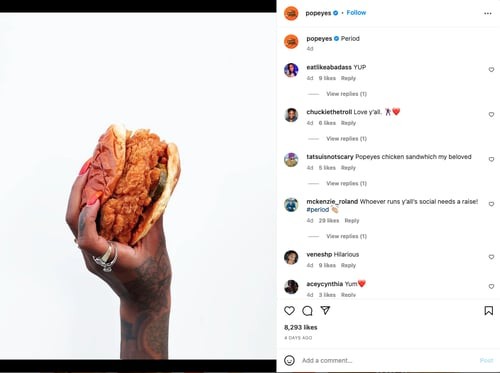 Popeyes is one of the few brands that executed this newsjacking correctly (and legally). Many brands wanting to jump on this news took a great legal risk.

Instead of following Popeyes lead, which replicated Rihanna’s image with its own product and hand model, many simply Photoshopped their products into the artist’s hands.

This could be considered copyright infringement, as the recreation of the image in this way is considered derivative work and requires explicit authorization from the copyright holder.

Secondly, it can also violate the artist’s right of publicity, as their likeness is used in a manner they have not agreed to.

Is this likely to escalate? Probably not as it serves as additional publicity for the NFL and Rihanna. However, in another case, it could. The legal consequences are simply not worth the temporary boost in reach or engagement.

The key takeaway here is that when newsjacking, it’s still important to review the trend before jumping in to ensure you’re not putting your brand at risk.

The reality TV competition show Big Brother isn’t where you’d expect to see Lay’s advertisement. But when one contestant showed a love for Lay’s chips, the brand started shouting out the contest on its Twitter account. 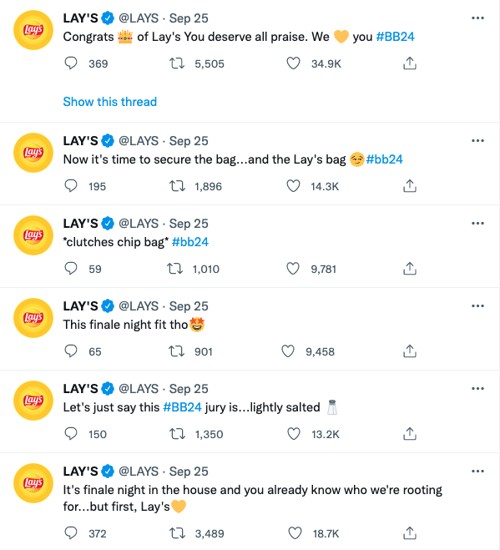 This particular contestant, and subsequent winner Taylor Hale, become one of the most popular faces of the franchise due to the bullying she faced in the house. With many Americans rallying around her to show their support, Lay’s also joined in.

Judging by Lay’s recent Tweets, their posts on Hale earned them over 50x more engagement than they typically get on the platform.

Once Hale was announced as the winner, the brand also contacted her – seemingly for a potential partnership.

This is a great example of how a brand can leverage a seemingly trivial situation and turn it into something special.

Remember when Wordle has us all agonizing over five-letter words? Well, LEGO capitalized on that buzz and joined in – in LEGO fashion, of course.

Something like this is so simple yet can be incredibly effective. Because the point of newsjacking isn’t necessarily to get sales, but instead to increase your reach, get engagement, and connect with your audience.

When you think of it this way, it’s much easier to leverage.

The conversation around NFTs started gaining steam in January 2021 and peaked one year later in January of this year, according to Google Trends,

Since then, brands have been scrambling to both understand what it is and how they can use NFTs for marketing.

NCL took the leap by leveraging the buzz around NFTs to announce its new cruise line. They released a collection of six NFT art pieces available for auction that depict the new cruise line at sea. 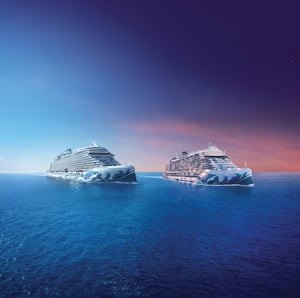 According to a press release, the winner of the auction will also win a room on one of the ship’s inaugural voyages.

BeReal has made a big splash this year as the better, more authentic version of Instagram.

As a quick refresher, the concept behind BeReal is simple: At some point every day, users are prompted to share a picture of themselves in real-time using both front and back cameras.

There are no pre-taken pictures allowed and once you miss the two-minute countdown, that’s it.

The idea is quite interesting and has garnered the attention of many consumers as well as brands.

The thing is, many brands are still unsure how to use the platform. Not K18 though.

Joining brands like Chipotle, E.L.F, and Rare Beauty, K18 is one of the few brands that are exploring this platform. 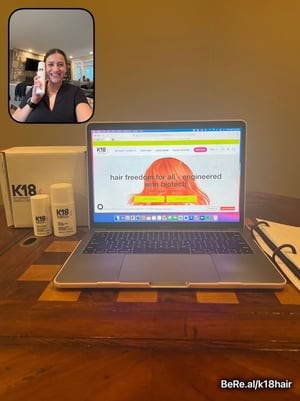 Because spontaneity is required, it makes it difficult for brands to add structure to their BeReal strategy. However, K18 has taken this as an opportunity to build community and take users behind the scenes.

The takeaway here is that not every platform will allow the same approach. Having some flexibility will give you more room to explore these trends as they come.

Trends come and go – the key is knowing which ones to join and which ones to skip. However, when done right, they can earn you a stronger community, more engagement, and more reach.