Whether it’s with a single client, a large internal team, or external stakeholders, hosting successful, engaging meetings is an art form.

It takes skill to know how to simultaneously capture attention, inform, be interactive, and leave a lasting impression — it’s really not an easy feat.

The prospect of holding a meeting may become even more stressful when the session is online. As meetings are new to the virtual world, there is no roadmap to hosting a successful one.

However, as nice as it would be, a roadmap is not always the key to success. Sometimes the key can be learning from people who have experience hosting virtual meetings and understanding what they think makes them successful. In this post, we’ll discuss common virtual meeting mistakes and get insight from experienced HubSpotters on how to avoid them.

Although many people know that, an all-too-common moment in virtual meetings is pushing mistakes under the rug and acting like they haven’t happened. Unfortunately, when everyone is looking at their screen, most people notice mistakes, and ignoring them can create a sense of awkwardness.

In these moments, it’s important to remember that an increasingly virtual world is new to everyone. We’re all aware that adapting to new processes can be difficult, so of course, there will be unexpected issues.

Jon Dick, Senior Vice President of Marketing at HubSpot, agrees, and his advice is relatively straightforward: “As the old saying goes, ‘If you can’t hide it, feature it!’ Slides not sharing? Children bursting into the room? Not on mute? Don’t stress out — just laugh, relax, and acknowledge it.”

2. No backup plan for faulty technology.

A dysfunctional microphone or PowerPoint won’t derail your in-person meeting, but it will effectively shut down a virtual one. Given this, Ashley Ladd, Manager on the Diversity, Inclusion, & Belonging team at HubSpot, says that not having a tech backup plan for your virtual meeting is a mistake.

Ladd says, “Our internet connection is always stable until we need it to be, so having a backup plan ensures flawless execution of your events and less worrying about your connection or having the meeting dropped.” 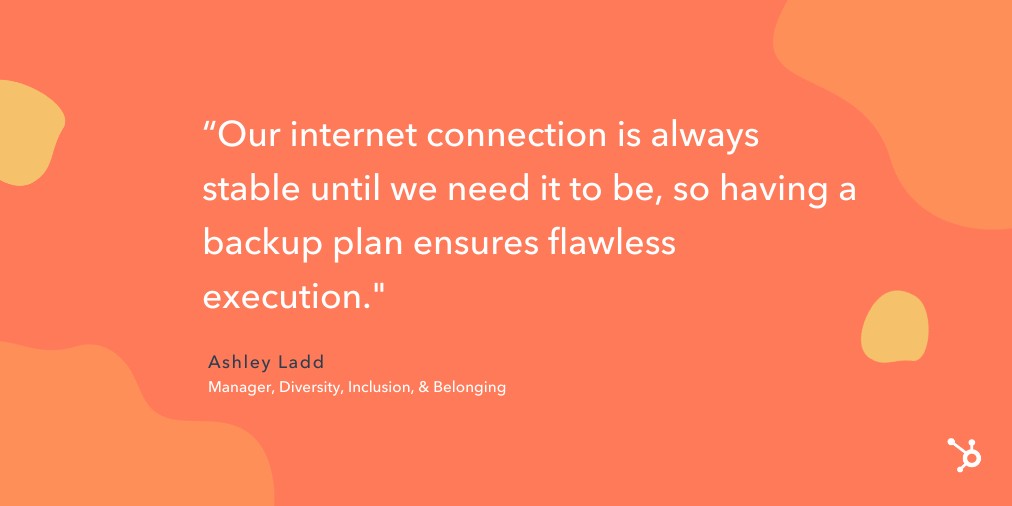 She says that your plan B can include things like a designated co-host, teammate, or friend to take over if something goes wrong, or while you troubleshoot any issues: “The worst is when you have to spend time fussing with your connection and it interrupts the flow of your meeting.”

3. A lack of discussion and collaboration.

One of the greatest aspects of meetings is the collaboration and discussion that stems from audience engagement. Virtual meetings notably make this harder, and they’re often marked by the opposite.

Becca Stamp, Senior Global Learning and Development Onboarding Specialist at HubSpot, says that a common mistake is not making space for conversation. Her solution is to make a special effort to encourage it: “It’s important to give everyone space to come off mute and contribute throughout the session. Participants can add so much value, both through discussion and chat.” 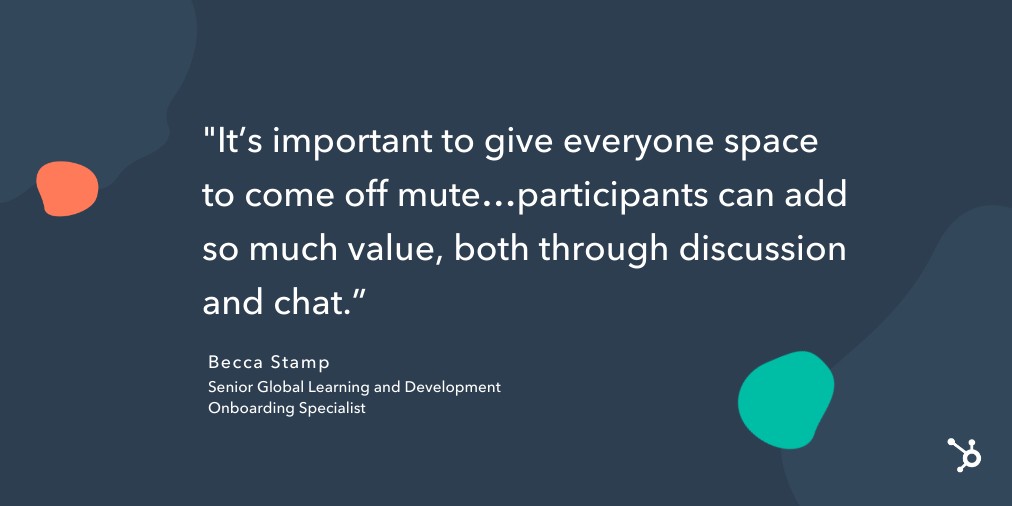 Jill Noonan, Senior Facilitator at HubSpot, seconds this tip and says: “Create interaction whenever possible. Whether in person or virtual, listening to one person present without any interaction or conversation can be draining for those listening. If you’re presenting in a virtual environment and someone asks a question, open it up for group discussion.”

4. Leaving inclusion and accessibility by the wayside.

Whether your meeting is in-person or virtual, it’s crucial to be mindful of and prioritize inclusion and accessibility.

Opt to use software that adds captions for speech transcription, write alternative descriptive text of images for screen reading devices, and be mindful of the differing experiences that attendees may have.

Ben Perreira, Diversity, Inclusion and Belonging Program Manager at HubSpot, says that an easy way to show you care about DI&B is to encourage attendees to put pronouns in their profile names. He says, “Add pronouns to your Zoom name as a way of showing up for inclusion during virtual meetings, and encourage your teammates to do so as well.” 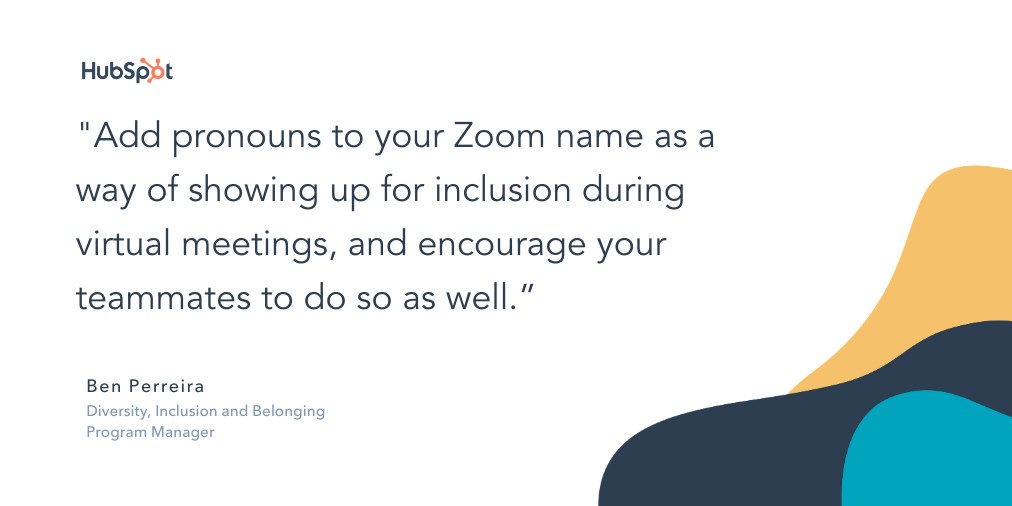 If you’re using a personal computer, it can be especially difficult to stay focused because everything you enjoy is right there in front of you. A quick check of your email can accidentally turn into ten minutes of distractions that take you away from meeting content.

That’s why a common mistake is, or at least trying, to multitask during meetings. Dick says: “Multitasking during your meetings is a sure-fire way to feel uninformed and unaccomplished at the end of the day.” His solution? Easy — “Mute notifications and close email.”

6. Not encouraging speakers and hosts.

Don’t assume that someone may be more comfortable during a virtual meeting because they’re not in front of an in-person audience. It can still be just as nerve-wracking to face a screen full of faces as it is to stare at a room full of people.

However, the support that people receive from attendees during in-person meetings, like applause, can be encouraging and make hosts feel more comfortable. Unfortunately, this support is often missing from virtual meetings.

Even if you can’t clap, Dick says that it’s still essential to show encouragement virtually, as it can feel strange to present without any human reactions. He says, “Hop in the chat window to cheer people on and encourage them when they’re presenting. It’s encouraging and helps people feel like you’re listening.”

7. Leaving no space for networking.

As virtual meetings occur on a digital device, attendees have no further interaction with their peers when they end. Stamp says that forgetting about the hallway chat aspect of meetings can be detrimental, as this time often gives people a chance to network, make connections, and decompress.

She says, about HubSpot employee onboarding, “We have seen incredible value in spending five to ten extra minutes on Zoom at the end of each session. It creates the hallway environment of in-person sessions, and these conversations help us build more community among the cohorts.”

You may feel pressure to display a more polished side of yourself during virtual meetings. In some cases, like when business executives speak to their teams, it makes sense and is expected that the experience is more corporate and clean cut.

However, being too polished can sometimes dehumanize you, which affects relatability between you and your audience.

Robotic meeting environments can also feel boring and disengaging, which is the opposite of what you want. Noonan’s tip is to display humanity through personalization. She says, “Humanity is extremely important. Knowing when and where to use personal examples or display vulnerability builds trust and shows that we’re all on the same page.” 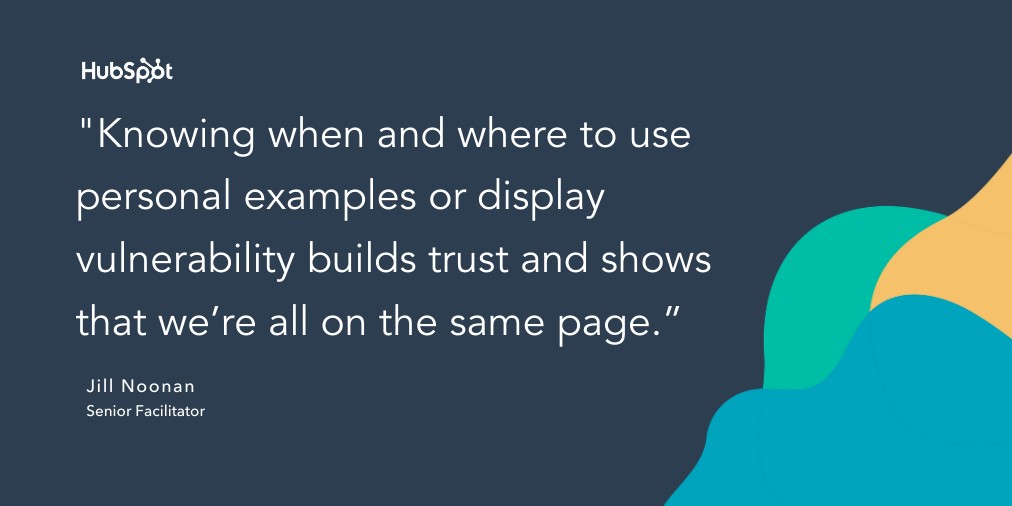 9. Not using the mute button for all it’s worth.

Nobody wants to accidentally leave their microphone on so everyone can hear them yell to a roommate or ask a pet to stop making noise. It’s not a huge faux pas, but there are easy ways to avoid this short-lived but all-too-common mistake of not using the mute button for all that it’s worth.

Perreira says, “When you’re not talking, mute yourself. The mute/unmute can also serve as a signal to indicate you’re ready to contribute and serve a [sic] helpful way for group members to ensure that those who are looking to speak are given the opportunity to be heard.”

Although hosting can be stressful, Ladd and Stamp say that it’s essential to have fun.

Ladd recalls a BLACKhub community check-in where attendees played a game called This or That. She says, “We did a Black History Month edition, so our game featured Black leaders in sports, film, entrepreneurship, and more. We had about eight different slides, and it was a fun, quick, and easy way to get everyone interacting and participating.”

Stamp makes space for these moments during onboarding meetings as well: “Schedule optional coffee, lunch, or afternoon hang-outs to help attendees connect. This gives our new hires a space to get to know each other in an authentic and more personal way.”

Virtual Meetings Can Still Be Successful, Engaging, and Fulfilling

Although there are quite a few mistakes on this list, they are exactly that — mistakes. They aren’t the end of the world, and nobody will penalize you for them.

Consider the advice from experienced HubSpotters, and you’ll likely find yourself hosting engaging virtual meetings that are just as impactful as those you can have in-person.